As representatives of authors, we very much welcome the focus of the European Parliament on the situation of our members, who are by definition the primary creators of cultural works, and we look forward to share our views with MEPs on this report about the situation of artists and the cultural recovery in the EU. Authors are in their vast majority freelancers who face precarious working conditions, low and unstable income, and a very weak bargaining position vis-à-vis their negotiating counterpart, as shown by a recent study on the status and the working conditions of artists and creative professionals. In 2019, an EU wide study of the income of European Screenwriters and Directors established that their median after-tax annual income from their work as authors was €19,000 (including income generated in that year from the exploitation of past work) in 2016. In addition, an internal survey with ECSA Members in 2020 has shown that 74% of music authors cannot live from the income from their artistic profession. Various national studies of the situation of freelance writers (of literature, poetry, etc.) had a falling annual income which was in 2017 around or less than €10,000.

This situation has only been exacerbated by the COVID-19 pandemic, which has a dramatic impact on our members and on many players in the cultural and creative sectors.[1] The recent EY study “Rebuilding Europe – The cultural and creative economy before and after the COVID-19 crisis”, supported by our organisations has shown that Cultural and Creative Industries (as a whole) experienced losses of over 30% of their turnover for 2020 – a cumulated loss of €199 billion – with music and performing art sectors experiencing 75% and 90 % losses respectively, €53 billion for visual arts, €26 billion for audiovisual, etc. In the meantime, a recent European Parliament study on the cultural and creative sectors in post-COVID-19 Europe states that “the real winners of the crisis are definitely streaming sites”. As many streaming platforms are booming with the pandemic, it is clearer than ever that authors are not reaping the benefits of their creative successes when their works are exploited, in particular online.

In our view, the European Parliament should support long-term solutions to both 1)  improve the remuneration and working conditions of authors and 2)  contribute to the recovery of the cultural and creative sectors and their creators:

1) Improving the situation of authors

a) An ambitious, faithful and timely implementation of the Copyright and AVMS Directives

In 2019, the EU adopted the Directive on Copyright in the Digital Single Market,[2] which includes in its Articles 18 to 23 (Title IV, Chapter 3, Fair remuneration in exploitation contracts of authors and performers) a new harmonised framework for the contractual relationship between authors and their contractual counterparts, which stems from the explicit acknowledgement by the EU legislator of the systemic weak bargaining power of authors negotiating their individual contracts.

Our organisations and the hundreds of thousands of authors they represent have welcomed this essential and historical step forward to bring fairer terms to all authors in the European Union and improve their working conditions. Yet, while the Directive must be implemented by all EU Member States by 7th June 2021, only one country (the Netherlands) has effectively done so at this stage. As a result, the positive impacts that a thorough and faithful implementation are expected to bring to authors, are still a distant promise.

We therefore strongly encourage the European Parliament – which played a key role in improving those provisions during the legislative process – to do its utmost to urge EU Member States to engage in an ambitious implementation of the Copyright Directive without further delay. Our organisations have adopted recommendations for a thorough and faithful implementation process in national legislation, consistent with the spirit of the Directive. In particular, we encourage the European Parliament to:

The recent study on the status and working conditions of artists and creative professionals rightly mentions that “the swift and effective implementation of the Copyright Directive is essential to ensure the ability of creators to negotiate and be properly remunerated for the use of their works online” and that “it would also significantly contribute to address some of the challenges that have been exacerbated by the COVID-19 related crisis”. The recent EY study also recommends to “ensure a rapid and effective implementation of the recently adopted directives on copyright and related rights in order to enable creators and the wider rights holder community, as well as cultural enterprises, to better harvest the value of the online market and new modes of exploitation”.

The AVMS Directive,[4] which includes important provisions aimed at promoting European works, must also be implemented without further delay to increase the investment into European works and contribute to Europe’s culture recovery. The EU should also step up its effort to protect cultural diversity in other cultural sectors, such as music. More transparency from streamers should be required regarding their contractual practices, algorithms, recommendations and viewership data, if the EU wants to effectively protect and promote cultural diversity. Neither the DSA nor the DMA proposals includes any provisions aimed at global streamers, despite the role of gate keepers that many of them play on the market.

While the European Parliament recently called “on the Commission to work on better quantitative and qualitative indicators in order to provide a reliable and steady flow of data relating to the cultural and creative sectors and industries,”[5] we consider that those objectives can only be fulfilled by strong transparency obligations applying to global streaming services.

b) Remove the obstacles to collective bargaining agreements

In line with its recent resolution on the cultural recovery of Europe, which “stresses that the implementation of those directives and forthcoming legislative proposals must preserve and promote collective mechanisms to ensure adequate protection of individual creators”, we also encourage the EP to ensure that collective bargaining agreements can be a tool to improve the position of authors.

Collective bargaining agreements between authors and their contractual counterparts (publishers, producers, streaming services and others) have the potential to improve the remuneration and working conditions of authors, while respecting the different creative sectors’ specificities. Their usefulness for authors and performers to address their “weak negotiating position” has been acknowledged by the EU in the 2019 Copyright Directive.

The EP recent study on “Cultural and creative sectors in post-COVID-19 Europe recommends to a) acknowledge the right of association for all workers in the CCS, regardless of their working status, to improve their bargaining position b) introduce fair pay as a principle for (working) contracts within the Cultural and Creative sectors. We clearly embrace and support those two recommendations, in addition to considering adequate social benefits for authors in all EU Member States.

The European Commission has recently started to tackle this issue by consulting on a potential clarification of the scope of EU competition law to enable an improvement of the working conditions of freelancers through collective bargaining agreements. Such a clarification could not only unlock collective bargaining agreements for authors but also greatly improve the working conditions of all self-employed and free-lancers in Europe. The recent study on the status and working conditions of artists and cultural and creative professionals states that “the conflict between labour law rights and competition law should be resolved so that all artists, including the self-employed, adequately enjoy freedom of association, the right to collective bargaining and the related beneficial outcomes”.

We strongly encourage the European Parliament to embrace this objective and advocate for an ambitious and binding regulation that would effectively ensure that EU competition law does not stand in the way of collective agreements for freelancers and self-employed.

2) Strengthen the support to European creators and the cultural and creative sectors.

In its resolution on the cultural recovery, the European Parliament “considers it fundamental to earmark for the cultural and creative sectors and industries a significant part of the economic recovery measures planned by the European institutions and to combine this with wide-ranging and swift actions in favour of Europe’s cultural and creative forces”. It also “calls on the Commission to identify whether the national financial distribution methods for cultural funding are accessible to all creators”.

As European countries are now designing their national recovery plans, those overarching objectives are more valid and legitimate than ever:

ECSA (European Composer and Songwriter Alliance) – The European Composer and Songwriter Alliance (ECSA) represents over 30,000 professional composers and songwriters in 27 European countries. With 57-member organisations across Europe, the Alliance speaks for the interests of music creators of art & classical music (contemporary), film & audiovisual music, as well as popular music.

[3] Communication from the European Commission Europe’s Media in the Digital Decade: An Action Plan to Support Recovery and Transformation – COM/2020/784 final

[4] Directive 2010/13/EU on the coordination of certain provisions laid down by law, regulation or administrative action in Member States concerning the provision of audiovisual media services.

Please click here for the PDF version (redirect to the homepage of ECSA).

RE:START CONVERSATIONS. Beyond the crisis: Recovery, resilience and sustainability of the book sector – 17 March 10.00 CET – ONLINE 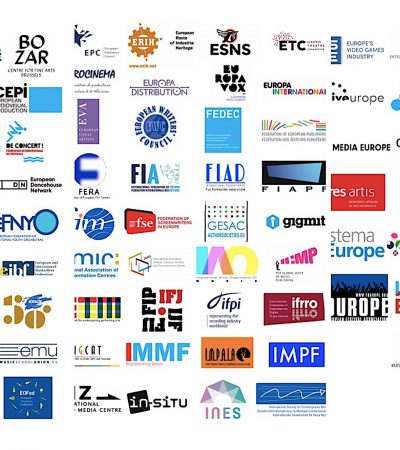 #freewordsbelarus: 36 Presidents, Chairs and board members of 33 writers’ and translators’ organisations from 22 countries representing 120,000 authors, join voices to support the democracy movement in Belarus.