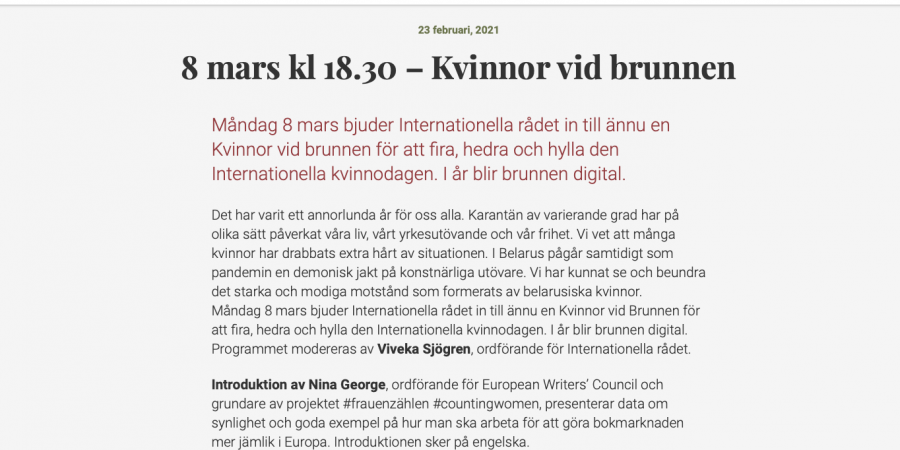 On Monday 8 March, the International Council of the Swedish Writers’ Union invites to another Women at the Well to honor and celebrate International Women’s Day.

This year, the well will be digital.
It has been a different year for all of us. Quarantine of varying degrees has in various ways affected our lives, our professional practice and our freedom. We know that many women have been hit extra hard by the situation. In Belarus, at the same time as the pandemic, a demonic hunt for artistic practitioners is taking place. We have been able to see and admire the strong and courageous resistance formed by Belarusian women.
On Monday 8 March, the International Council invites to another Women at the Well to celebrate, honor and celebrate International Women’s Day. This year, the well will be digital.
The program is moderated by Viveka Sjögren, Chair of the International Council of the Swedish Writers’ Union, and Board Member of the EWC.
Introduction by Nina George, President of the European Writers’ Council and founder of the project #Frauenzählen #countingwomen, presents data on visibility and good examples of how to work to make the book market more equal in Europe. The introduction is in English.

Nina George has been an award-winning and internationally best-selling author and journalist since 1992. She writes novels, non-fiction, short stories and chronicles. In 2013, she had her first bestseller in the New York Times, Das Lavendelzimmer / The Little Bookstore in Paris, translated into 36 languages. Nina George lives in Berlin and in Brittany.
Speech by Kayo Mpoyi
Kayo Mpoyi has joined Biskops-Arnö’s writing line, is a trained media producer and has worked as a writing teacher. Now she works part-time as a librarian at the library in Jordbro, studies art and writes. Her debut novel Mai Means Water was awarded the Catapult Prize 2019.

Tua Forsström is a Finnish-Swedish author, best known as a poet, but she has also written texts for an oratorio and a requiem, opera libretto and drama. She has been style-forming in Nordic poetry and has been awarded a number of literature prizes. In 2019, she was appointed a member of the Swedish Academy.
Hanna Komar is a poet, translator and activist based in Minsk, Belarus. Author of the poetry collections Fear of Heights (2016, Minsk) Recycled (2017, London). She has also translated Charles Bukowski and British and American poetry into Belarusian.
Inga-Lina Lindqvist is a poet, author and literary critic. She grew up in Belarus. Inga-Lina made her debut in 1994 with the collection of poems Änglaspår and has since published collections of poems, prose books and children’s books.
Justina Farima Habashizadehasl was born in 1990 and is better known by her stage name Justina. She is an Iranian singer and rapper and Piteå’s second sanctuary artist. In Iran, female artists are tightly controlled and are not allowed to perform or record music as solo artists. Despite this, Justina has managed to reach out with her music mainly by collaborating with foreign record companies that have ensured that her music and videos are spread online.
In her music, Justina often raises questions about women’s rights, freedom of expression and questions the Iranian regime, something that the international media has noticed. As a result, she has been persecuted and harassed by the Iranian authorities.

EWC at the Creators Conference

EWC at the Symposium FIL – Women in the literary sector (Switzerland)

EWC at the CRIMINALE (Germany)

EWC at the WIPO SCCR/42 meeting

EWC at Week for Freedom of Expression