Support for Writers from Ukraine and Belarus: EWC launches #FreeAllWords
#FreeAllWords: International Text and Translation Fund of the European Writers’ Council (EWC) gives a voice to authors from Belarus and Ukraine Brussels, 14 July 2022 Media information for immediate release Media campaign starts at the end of July Presentation at the Frankfurt Book Fair The international initiative #FreeAllWords (www.freeallwords.org) was set up by the European Writers’ Council (EWC) with the ...

EWC POSITION PAPER
One Year of Crisis: The Winter of our Discontent. The European Writers’ Council publishes its follow-up survey on the Economic Impact of the Covid-19 Crisis on Writers and Translators in the European Book Sector 2020-2022 and states its position on the results. ...

EWC STATEMENT
The EWC has withdrawn from the Consortium of the European Union Prize for Literature (EUPL) with effect from January 2022. “The new EUPL concept does not promote multilingualism as key to the European language diversity, and is not following the principles of equal treatment for all participating countries”, says the EWC Board. ...

Ukraine: European and International Writers and Translators against War and Violence – 53 Chairs and Presidents from 29 countries signed the declaration
We condemn Putin’s crimes against democracy and humanity The violent attack on 24 February by the Russian government on Ukraine is a war against all democracies, our values, our convictions of peace, freedom and human rights. Russian President Putin’s despicable war attacks in Ukraine massively violate the democratic freedom won in many states in Eastern Europe after 1989. ...

#StandwithUkraine – HOW TO SUPPORT
Recommendations by EWC member organisations and European writers’ and translators’ associations ...

9 November 2021: EUPL 2021 AWARD CEREMONY
European Union Prize for Literature looks forward to the 2021 Award Ceremony in Brussels – live & livestreamed The European Union Prize for Literature (EUPL) is pleased to announce its 2021 Award Ceremony will take place on 9 November 2021. The ceremony will celebrate the thirteen national laureates of the 2021 edition. Taking place at the culture house Flagey in ... 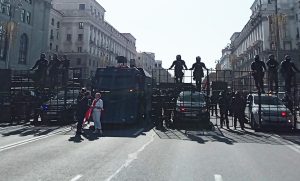 To the Members of the European Parliament DROI Subcommittee on Human Rights
Human rights violation and state abuse against cultural professionals, writers and translators in Belarus. Briefing by the European Writers’ Council for the DROI meeting on 27 and 28 October 2021. ...

Belarus: Radical crackdown against the Free Word
The European Council of Literary Translators’ Associations (CEATL), the European Federation of Journalists (EFJ) and the European Writers Council (EWC) call on the governments of Europe and the international community to demonstrate firm support for the democracy movement in Belarus and to provide refuge and humanitarian assistance to those fleeing the country. ...
1 2 3 4 Next »