The Society of Authors (SoA) and the Writers’ Guild of Great Britain (WGGB) have today called for reform of the ‘hybrid’ / paid-for publishing sector. The trade unions, who together represent 14,800 authors, have jointly published Is it a steal? An investigation into ‘hybrid’ / paid-for publishing services to expose widespread bad practice among companies that charge writers to publish their work while taking their rights. 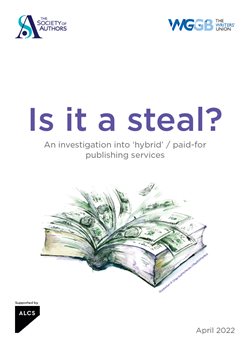 The report, supported by ALCS, is the first full-scale assessment of the relationship between writers and companies who refer to themselves as ‘hybrid’, ‘partnership’ or ‘contributory’ publishers (among other terms) but have much in common with what have historically been described as ‘vanity’ publishers. It details aggressive marketing tactics, manipulative sales approaches, unclear contracts and publishing processes and services that fall far short of expectations and value. The report also includes the findings of a survey which found that 94% of writers who had paid to have their book published, lost money typically in the thousands, paying an average of £2,000 with median royalties coming in at a mere £68.

As one survey respondent said, ‘After four months of unsuccessfully trying to get more support from the company, I gave up trying to contact them. My first royalty statement shows earnings of £30. I see the £2,000 I paid them as lost.’

A third survey respondent paid £5,000 for publication and said the process ‘completely destroyed my faith in their ability to produce a book and market it effectively, and the experience has dented my confidence in publishing in general’.

Speaking about the report’s findings, Nicola Solomon, chief executive of the Society of Authors, said:

‘This report shines a spotlight on some concerning practices including questionable marketing tactics, vast costs with no hope of returns, rights grabs and contracts which are, at best, opaque, and, at worst, misleading. There is no one right way for a book to come to market, but as the publishing industry continues to evolve, we need to ensure that authors are not taken advantage of or blindsided by blandishments that don’t translate into contractual obligations and implied guarantees that, very clearly, these companies aren’t honouring.’

The joint report, supported by the Authors’ Licensing and Collecting Society (ALCS), follows a steady rise in SoA and WGGB members seeking advice from their respective unions about ‘hybrid’ / paid-for publishing deals they have been offered. The survey found that the average loss for a writer in a ‘hybrid’ / paid-for publishing deal was £1,861 with some participants reporting losses as high as £9,900. Each deal resulted in a median of just 67 books sold, including those that writers bought themselves, while 59% of writers said their book was not available to buy in bookshops, supermarkets and retail outlets.

‘Fundamentally, what we’re seeing here is a hijacking of the term publisher,’ continues Solomon. ‘These companies are not traditional publishers. They provide a service and should market it as such so as not to mislead authors. We all have a role to play in ensuring people are not exploited by these deals, and that includes being clear in how we define what a publisher is. Trade bodies and advertising platforms have an important role to play here too – they have a responsibility to ensure that paid-for publishers can demonstrate their legitimacy.’

‘Digital innovation is opening up new opportunities for authors but we need to ensure this brave new world does not lead to the exploitation and erosion of writers’ rights.

‘Sadly, as our joint report Is it a steal? illustrates, bad practice is entrenched, with authors losing large sums of money, relinquishing their intellectual property and falling prey to misleading marketing and exploitative business models.

‘We have seen an exponential rise in our members seeking help in the paid-for publishing arena and we will be stepping up our campaigning work to educate and protect authors and to call on ‘hybrid’ / paid-for publishers, trade bodies and advertisers to step up, stamp out and stem the tide of this worrying and growing trend.

Is it a steal?

Support for Writers from Ukraine and Belarus: The project #FreeAllWords