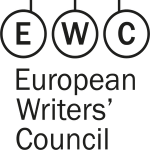 The EWC has been an Official Observer of the World Intellectual Property Organisation (WIPO) for over two decades, and since 2022 Observer in the upcoming sessions of the governing bodies of the UNESCO Convention on the Protection and Promotion of the Diversity of Cultural Expressions.
EU Transparency Register Number: 56788289570-24

The EWC was originally founded in 1977 (Berlin) as the European Writers’ Congress. The first statutes were adopted in 1985, and modified in 2003. EWC began a new era on 21 September, 2006, with its official constitution as an International Non-Profit Association under Belgian law, as Association Internationale Sans But Lucratif/AISBL. In 2009, the official name in English was changed to European Writers’ Council, with the registered acronym EWC.

Support for Writers from Ukraine and Belarus: The project #FreeAllWords