The Winter of our Discontent: 2nd Survey on the Impact of the Corona Crisis

The Winter of our Discontent: 2nd Survey on the Impact of the Corona Crisis

1. The Survey and its results

The study was developed, evaluated, written (NG) and designed (MAS) by Miguel Ángel Serrano and Nina George. From the foreword and the abstract:

The Ernst & Young study Rebuilding Europe showed how seriously the Covid-19 crisis and its sanitary measures affected the European cultural landscape: 90% losses for the performing arts, 76% in the music sector, 56% in the fine arts, 30% in the book sector.

Large numbers, however, are hiding cloaks. They make the individuals and their existential dramas invisible and conceal how overall losses impact individually and sector-specifically. For this reason, the European Writers’ Council is continuing in 2021 its monitoring of the impact of the Corona pandemic on writers and translators with this survey: ONE YEAR OF CRISIS: THE WINTER OF OUR DISCONTENT.

The first EWC report on the Economic Impact of Covid-19 on Writers and Translators in the European Book Sector 2020 assessed the different fields of losses, the expected severe consequences and developments. The European Writers’ Council conducted this follow-up monitoring One Year of Crisis: The Winter of our Discontent from March 27 to May 8, 2021. 27 writers’ and translators’ organisations from 20 countries, representing 158,000 authors of all genres and writing in 24 languages, participated and contributed 112 pages in total of figures, facts and testimonials on 23 specific quantitative and qualitative questions proposed online.

The focus of One Year of Crisis is on the scope of the economic loss for writers and translators, on how Publishing houses and national Governments reacted, on the value gaps in the digital sphere, and including insights into the educational book sector and remote learning.

Overall, at least four years of monitoring are planned in order to analyse the breaking points of the sector that have become apparent through the burning glass of the crisis, and to present sustainable measures to political decision-makers. This includes legal, economic, social and overall civic frameworks and conditions to secure the future of literature, knowledge and the freedom to form opinions. To respond constructively to the gaps visible in the crisis is a compelling prerequisite for the fundamental values of Europe.

We would like to thank MEP Niklas Nienaß, founder of the Cultural and Creators Friendship Group (CCFG) for his valuable and supportive introductory remarks. 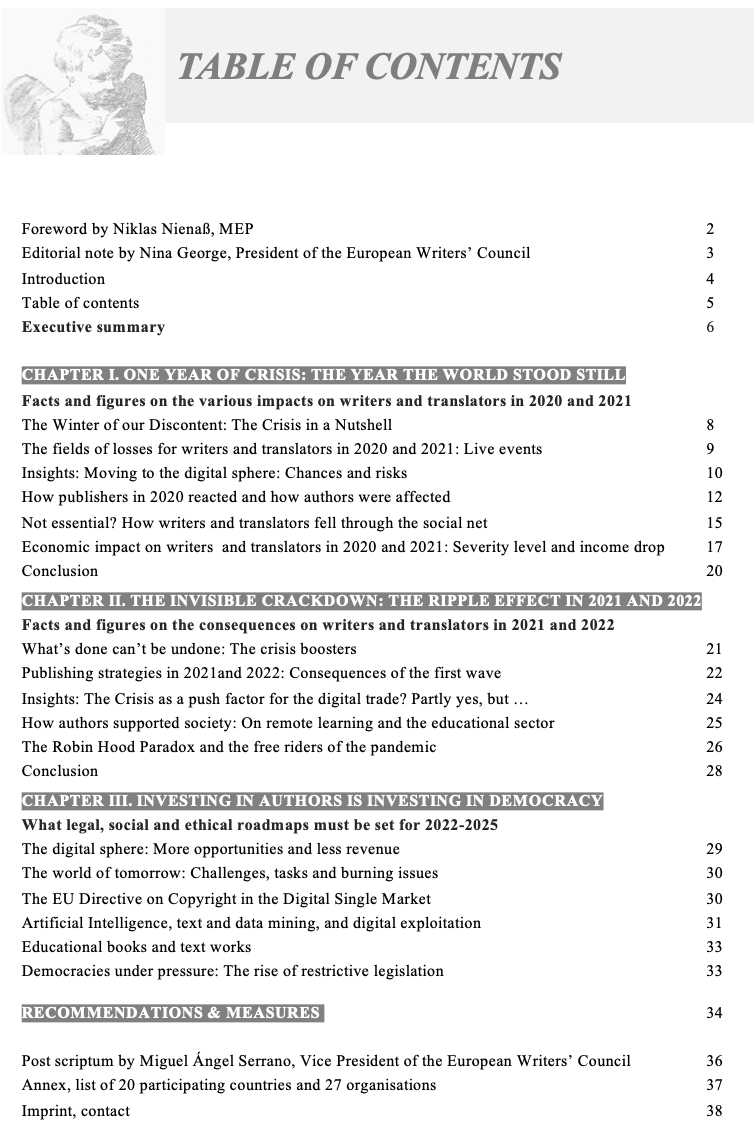 During March to May 2021, 27 writers’ and trans-lators’ organisations from 20 countries, including the non-EU countries Belarus, Switzerland, the United Kingdom and the EEA country Norway, representing 150,000 authors of all genres, responded to the follow-up survey by the European Writers’ Council on the economic impact of the Covid-19 crisis on writers and translators. The monitoring, which follows the first EWC study, includes the résumé of the year 2020, the situation and consequences for 2021, and the forecasts for 2022.

The respondents provided concrete information on areas of loss, affected genres, severity of the crisis and its consequences in national book markets, and reported on State aid measures, positive developments and negative effects.

A special focus is put on digital transformation, and the use of instructional and educational materials within remote learning during the crisis.

The survey is concluded with ten recommendations to decision makers of the EU and national governments, and a position paper.

Losses for writers and translators in the book sector

There is not yet a coherent, homogeneous digital single market in the book sector: country-specific differences in distribution forms, market participants and dominance, as well as royalty models differ.

As consequence, partly increased digital sales have not been able to compensate for the loss in the print book sector.

The usage of educational book and text materials for schools, universities, researchers, or scientific institutions has risen considerably. The International Federation of Reprographic and Rights Organisations (IFRRO) recorded that 40% of CMOs received applications for license extensions or fee relief (which led to lower revenues for authors); 70% are expecting a negative long-term impact on the licensing income.

Another serious impact was an increase in digital piracy, tripling in some countries.

… and the digital opportunities

Online readings, book launches, digital lectures and workshops, and virtual conferences were identified as the most positive gains in the forced transition to the digital sphere. Festivals, fairs, and license trades continued to be preferred in the “real world”.

In some countries, the electronic book market was invigorated. Publishers (re-)discovered the possibilities of digital publishing, and the digital audio book market expanded.

Booksellers developed new forms of supply and, under pressure from the pandemic, established web-shops and click-and-collect or click-and-deliver methods.

52% of the respondents estimate the overall impact from severe to very severe, 48% somewhat severe. The differences are largely related to the existence of public support, the stability of the legal framework for remuneration, and the status of coordination and communication between the book industry players and their respective governments. Accordingly, the approaches to solutions must also be located here.

Cancelled paid live events, closed bookshops, cancellation of fairs, and the general invisibility of new titles were identified as the four strongest factors for the collapse. For nearly 40%, the resulting program cuts by publishers are another disruptive factor.

A selection of the EWC recommendations

Strong implementation of the EU Directive on Copyright in the DSM.

increasing the budget for education and culture.

A fair playing field in the digital distribution markets.

Bringing back the books to the adult readers – and to the children.

Previous Post
EWC STATEMENT: The EUPL is not inclusive anymore
Next Post
One Year of Crisis: The Winter of our Discontent

Women in Literature: The FIL Symposium

The EWC Annual General Assembly was succesfully held in Madrid.